Giant pandas YaYa and LeLe have been kept at the Memphis Zoo in Tennessee since 2003 and over time numerous issues have been raised about their care, health, and well-being. In recent years the pandas' suffering has noticeably increased as their health continues to deteriorate. The zoo and relevant officials must send Yaya and Lele back to China where they can get the appropriate care they need at a sanctuary!

Their fragile appearance and health have deteriorated tremendously in the last few years. They appear distinctly distressed and malnourished in their small, dirty enclosures, and they display a form of stereotypical stress behavior known as zoochosis. This behavior is a physical manifestation of mental suffering due to their restrictive enclosures and lack of enrichment.

Other notable issues are YaYa's severe fur loss due to a chronic infection from mites and LeLe's broken molars. In addition to their depressed appearance, both pandas have shown a lack of interest in the bamboo offered to them, which is often yellow and dried out. It is common to see YaYa pacing around her enclosure, shaking her head, and displaying self-harming behavior, or sleeping the whole day, and LeLe sitting for hours on end, playing with his tongue and roaring in anger after a long wait for food without any response.

For nearly two decades, YaYa and LeLe have been living in small indoor enclosures and sharing just one outdoor yard at the zoo. As pandas are for the most part very solitary animals, they must take turns using the outside yard rather than going out together. Because the zoo does not alternate them consistently throughout the day, they therefore do not have daily access to larger outdoor areas and cannot freely decide whether they want to stay indoors or go outside. In one documented period, YaYa was only allowed outdoors four times in a four-week period!

Several animal advocacy organizations have expressed concern about the issues the pandas are experiencing. Additionally, growing awareness about their condition on social media has drawn the attention of panda fans and animal advocates around the world, including the famous singer Billie Eilish (who tweeted for YaYa and LeLe), and zoo visitors who have witnessed their situation first-hand.

Concerns that were previously raised over a period of many months were confirmed when statements directed to Chinese panda fans were released by the Chinese Association of Zoological Gardens (CAZG) on March 10, 2022. They stated that medical examinations which were conducted in 2021 and in January 2022 concluded that the pandas were indeed underweight, especially YaYa. They also concluded that YaYa has fur loss due to chronic Demodex mites and LeLe has several broken molars. Given their underweight condition, CAZG suggested that the Memphis Zoo increase protein sources in the pandas' diet, provide various types of bamboo and treats, and offer bamboo shoots as supplementary food. However, according to the daily panda cam monitoring, it seems none of these suggestions to improve their health have been implemented. 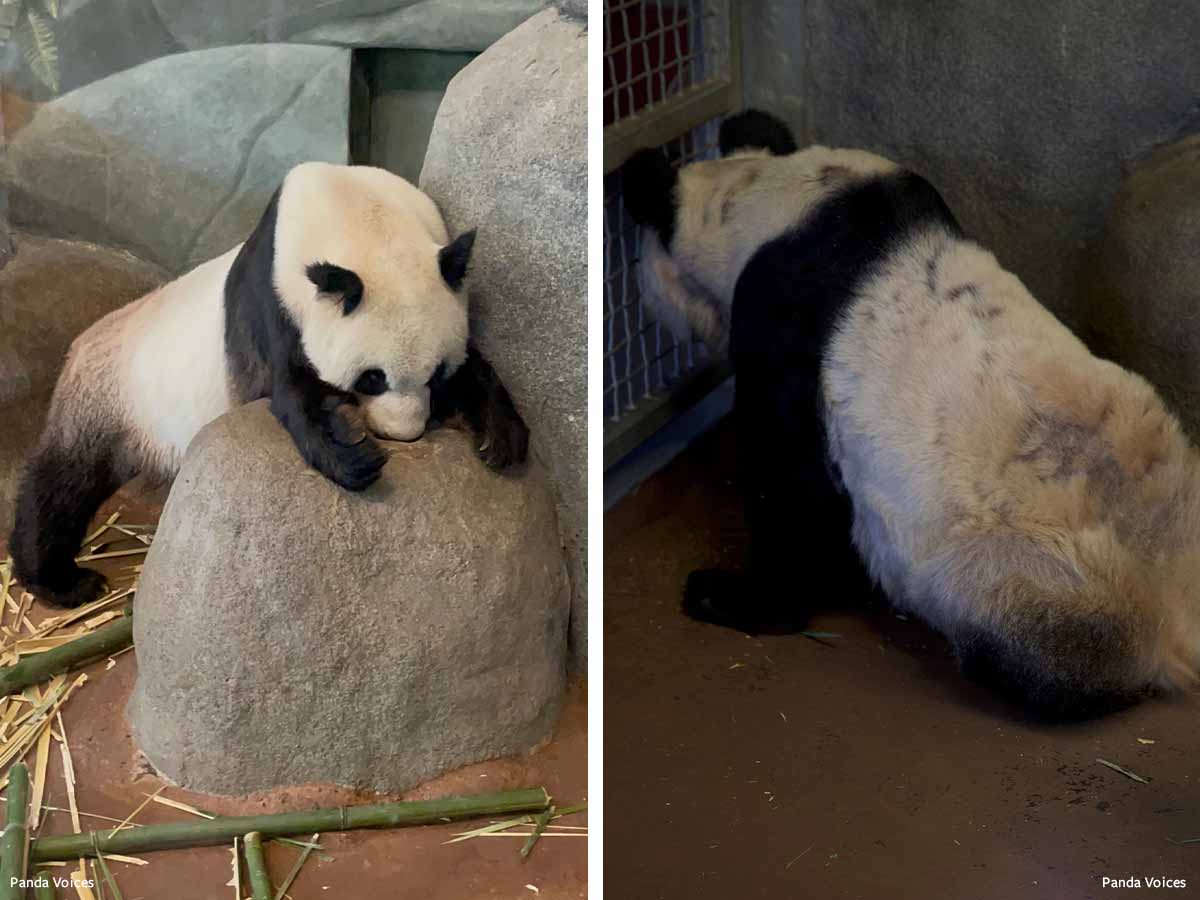 Although In Defense of Animals and Panda Voices continue to expose the pandas' suffering and have called for a meeting with the Memphis Zoo president a number of times to address these concerns, the zoo neither gives a positive response nor accepts the meeting requests for a transparent discussion. Instead, the zoo repeats its tired (and now seemingly untrue) statement that the pandas are being “well cared for” and neglects the public's specific concerns and follow-up questions. The zoo argues the pandas' ages justify their “older looking” condition. However, 22-year-old YaYa and 24-year-old LeLe are among the youngest pandas in captivity in the U.S, yet they look considerably older than other captive pandas who are over 30 years of age. The Memphis Zoo has chosen the path of denying that anything is wrong and has gone so far as to block fans' comments on its social media pages. Furthermore, the Association of Zoos & Aquariums (AZA) has shamefully declined to hold the Memphis Zoo accountable for the condition of the pandas.

The good news is that the loan contract between China and the Memphis Zoo is ending in April 2023. Therefore it is of great importance to put pressure on the zoo, CAZG, Chinese authorities, and the AZA to return the pandas to China once the contract ends and to immediately improve their diet and overall care to ensure that they are able to meet the health requirements to travel.

Join us in urging the new Memphis Zoo president Matt Thomspon and other relevant authorities to send YaYa and LeLe back to China, where they can live out their final years peacefully and free of suffering at a specialized panda refuge in their native country. Also, call on them to immediately improve the pandas' diet and care so that they can travel there.

YaYa and LeLe deserve a much better life with a rich and nutritious diet that includes a wider choice of bamboo, fresh bamboo shoots, a broader variety of snacks, and the care of experienced panda experts who will help them on their journey back to health, physically and mentally. It's long past time for the Memphis pandas to be returned to China where they will receive expert care and best have their needs met.

Read the next article
Stop the Bulldozers: Defend Ballona Wetlands’ Animals in Court

This alert was signed by 32,570 people and has now been delivered to the target.
Please take the following actions for animals who still urgently need your help: